Who is Franklin Energy:

Franklin Energy delivers the energy efficiency industry’s most substantial offering of demand-side management services and solutions to electric and natural gas utilities and statewide organizations across the United States and Canada. In late 2017, Christina Brickner, the Director of Proposals and Business Development Systems at Franklin Energy, began searching for a documentation collaboration and creation solution to fit their needs. Seeking something that would improve their writing process for proposals while also supporting the needs of their operational teams, Franklin Energy chose to start off with a pilot of XaitPorter. Within six months the team at Franklin Energy fully adopted XaitPorter, and have expanded usage across five departments. 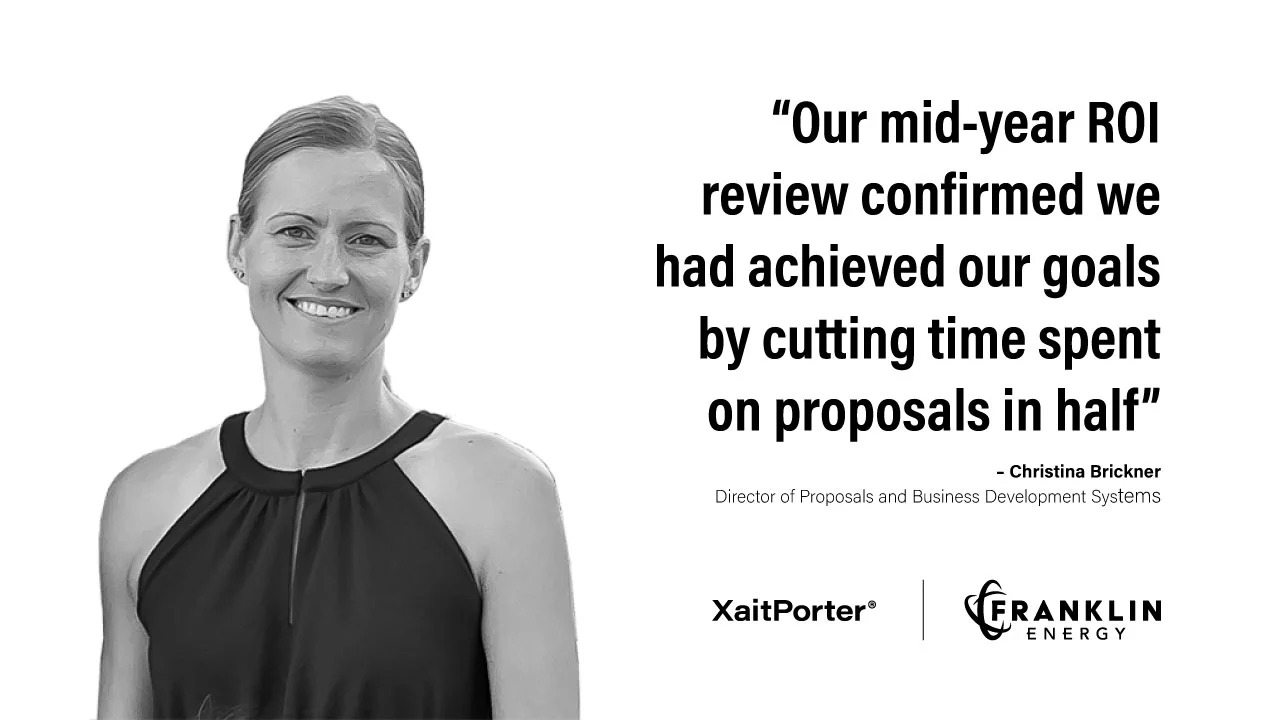 “Our mid-year ROI review confirmed we had achieved our goals by cutting time spent on proposals in half. This allowed us to respond to 65% more bids with the same level of resources”

Xait worked with Franklin Energy to identify challenges they were facing which allowed Xait to pinpoint key areas:

Using the pilot gave Franklin Energy the freedom they desired to determine if the product was right for their organizational needs. During onboarding, Xait helped create multiple templates for Franklin Energy to improve the quality and flexibility of the content they produce as well as reduce the time spent on writing documents.

From Pilot to Adoption:

For Christina, the pilot acted as a great selling point in comparison to other competitors solutions. As for her team, XaitPorter proved to be more efficient and effective than previous solutions. In other platforms used previously, users would waste time “finding documents or content…waiting for documents to open” and “losing work” that didn’t save properly. Franklin Energy has shared with Xait that our autosave feature and ability to create libraries with “all the information they need in one place” are a huge time saver. Other key features such as detailed workflow, task management, and consistent formatting solidified XaitPorter as the perfect fit for Franklin Energy.

After mastering our solution for proposal creation, Christina began to utilize XaitPorter to create documents in other departments such as HR material, operational guides, and project scopes. Since adopting XaitPorter, it’s safe to say Franklin Energy is pleased with their results – they have cited much less time spent in their writing process and overall a demonstrable return on investment.

Having Christina at Franklin Energy greatly influenced how our companies would work together to achieve their objectives and success with XaitPorter. More specifically, she had a clear and concise plan for Change Management within their organization, which assured their success.